Its here!!! The 2016 Nordstrom Anniversary Sale is live! Were you up at midnight pacific time to shop? They did things a little differently this year with no downtime to the website like in previous years. There were also none of the anniversary items loaded in advance (at least none reported!) Several people including me had trouble with the site. I had the same dress added to my cart 18 times as I clicked through various pages.

I went to the store and here’s some of the highlights and misses.

The Alexander Wang Darcy Hobo sold out super fast. If you are still lusting over it, you need to be online at the stroke of midnight when the public sale opens. I think that is your best shot at scoring one of those. I talked to a sales associate at the store today and the beet color sold out to Level 4 customers yesterday within the first hour!  Wow!  I saw the bag online at midnight but only in 2 of the 3 colors (black and latte), so I think that is probably why–all of the hobos in beet were already gone!

The 3.1 Phillip Lim Quill bags were also sold very quickly. As of right now, the mini Soleil chain bag is still for sale on the website in Cherry.

I saw the Yigal Azrouel sweater in store and it is so soft. The Burberry Brit Craysmore cropped peacoat was super cute, but that style just doesn’t work for me so I didn’t try it on. The material felt very nice though. 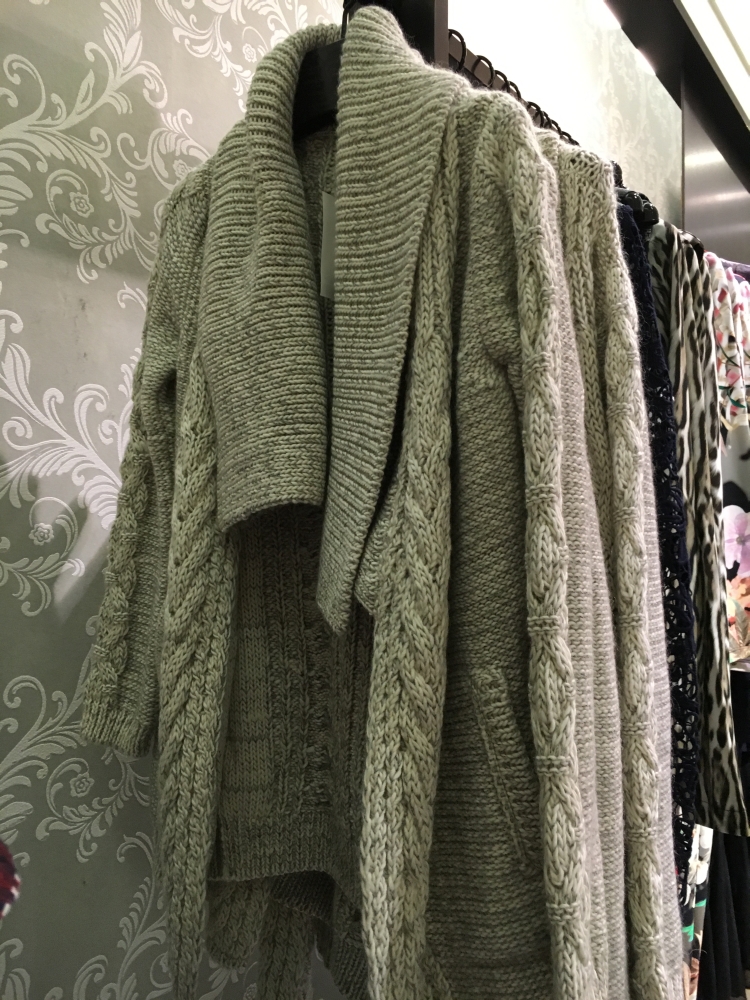 There were some Missoni scarves that I hadn’t heard anyone talk about. They were gorgeous!

The new Marc Jacobs bags were all very nice. I really like the grey leather that they use and the gold hardware. I have this combo in the form of a Classic Q Natasha in the old Marc by Marc Jacobs line. The hobo was very large.  I think the tote shown here was nicer. 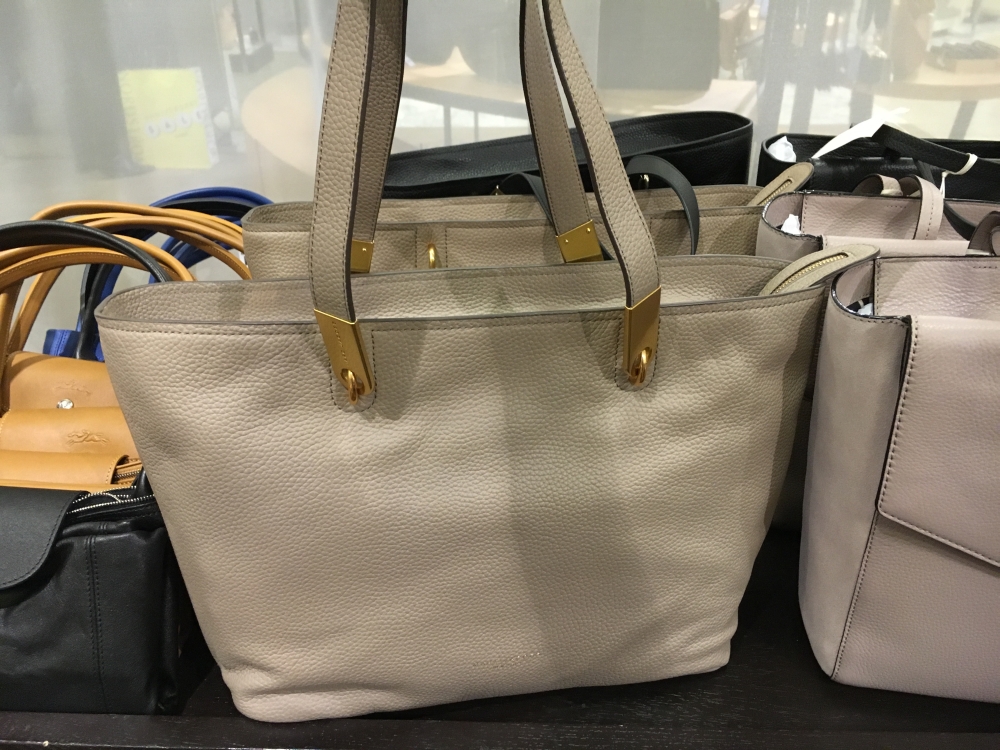 There was a pink Coach Crosby 24 bag that I thought was very cute. Love this shade of pink! 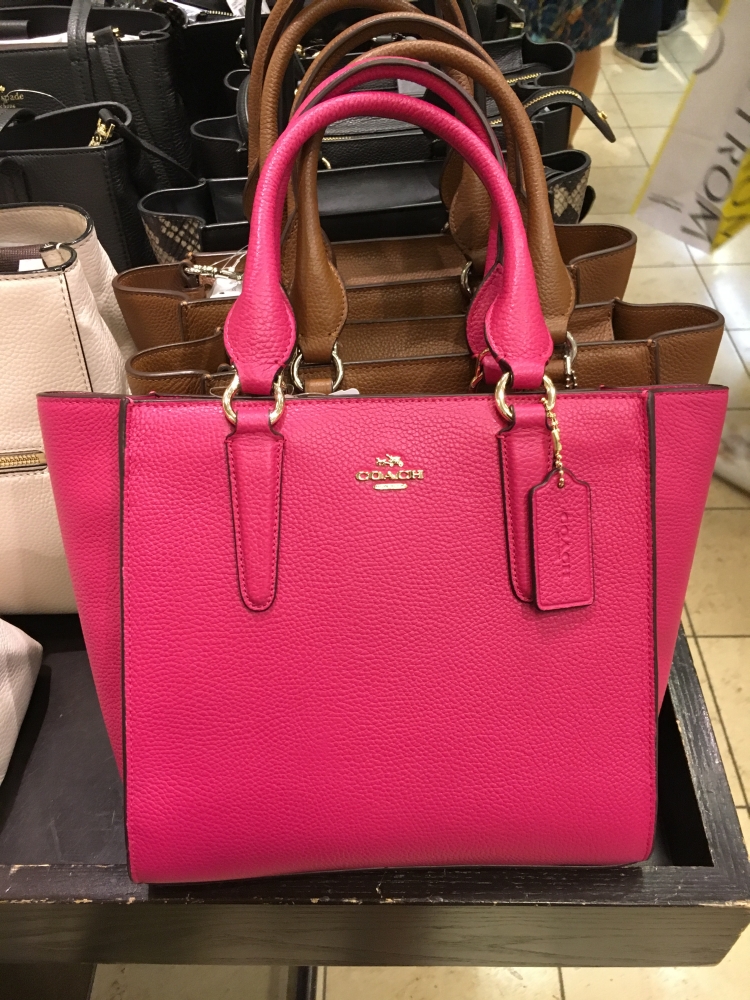 The shoe tent is always a zoo so I didn’t stay too long. I checked out the AGLs this year and thought that the AGL Blakely studded flats were cute, but the Kristin Block heel was a pass for me. The AGL Frankie Tall Wedge was amazing and SO SO LIGHT.  All 3 of these AGLs are Made in Italy. 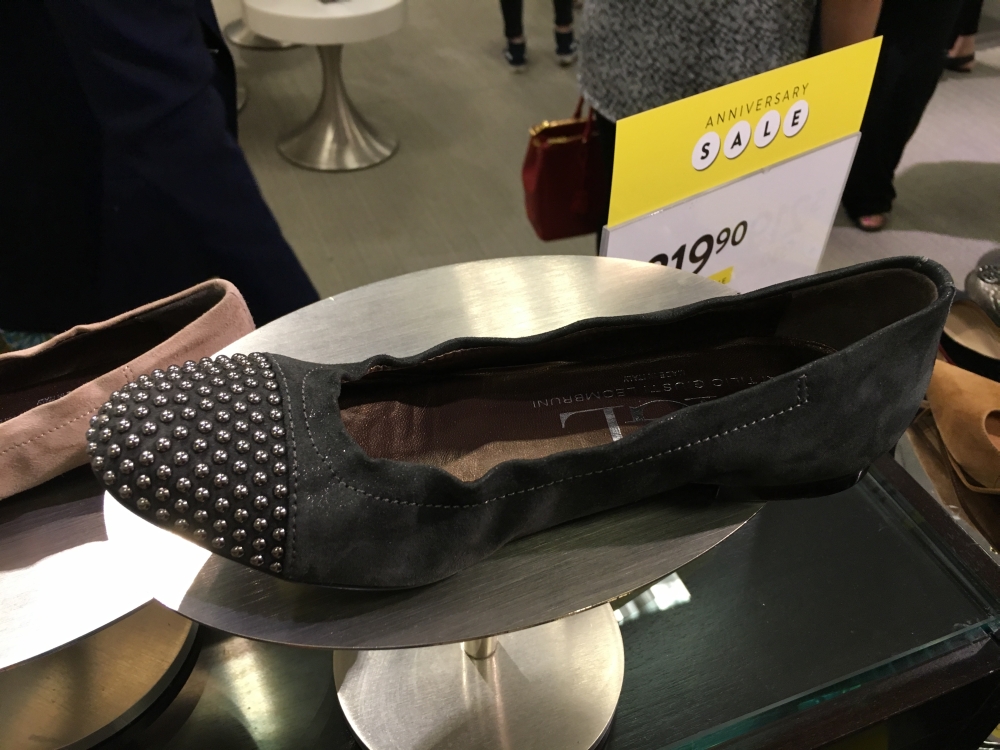 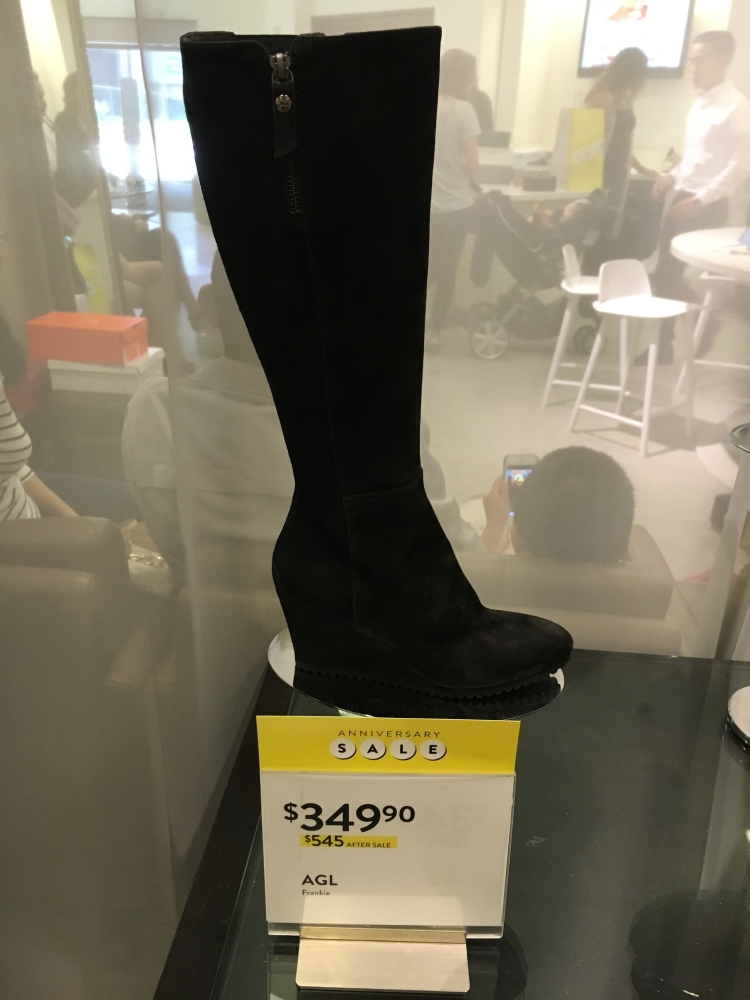 There was a La Canadienne boot and Blondo boot that I also liked. 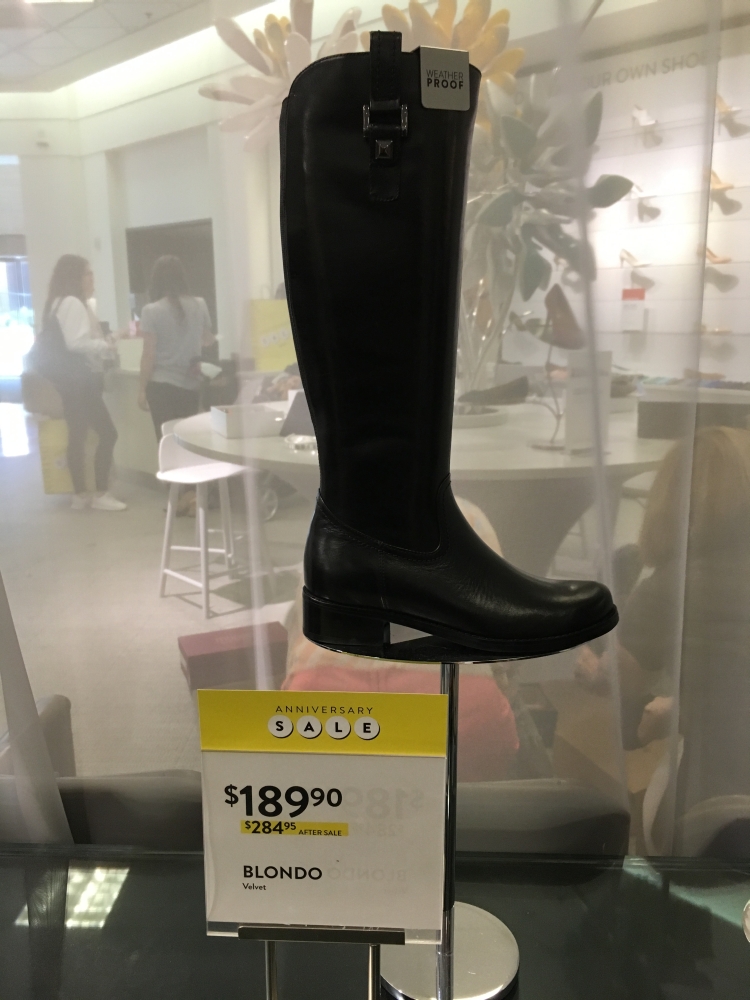 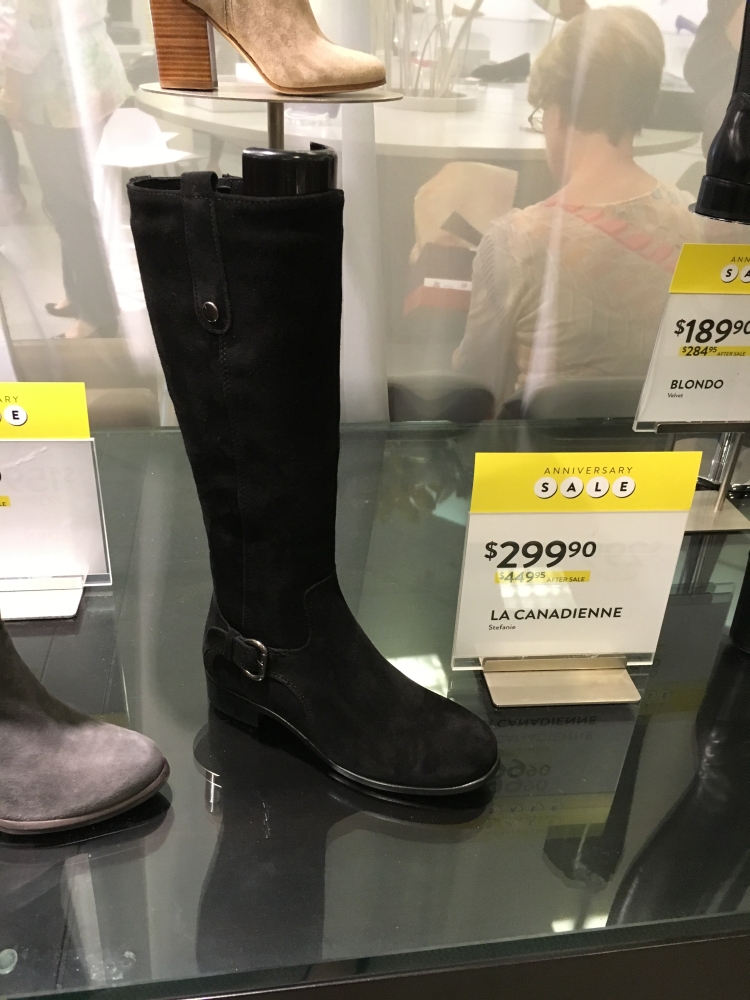 The Tory Burch flats looked cute but I didn’t try on. I liked the pewter snake (the shiny one) color a lot. 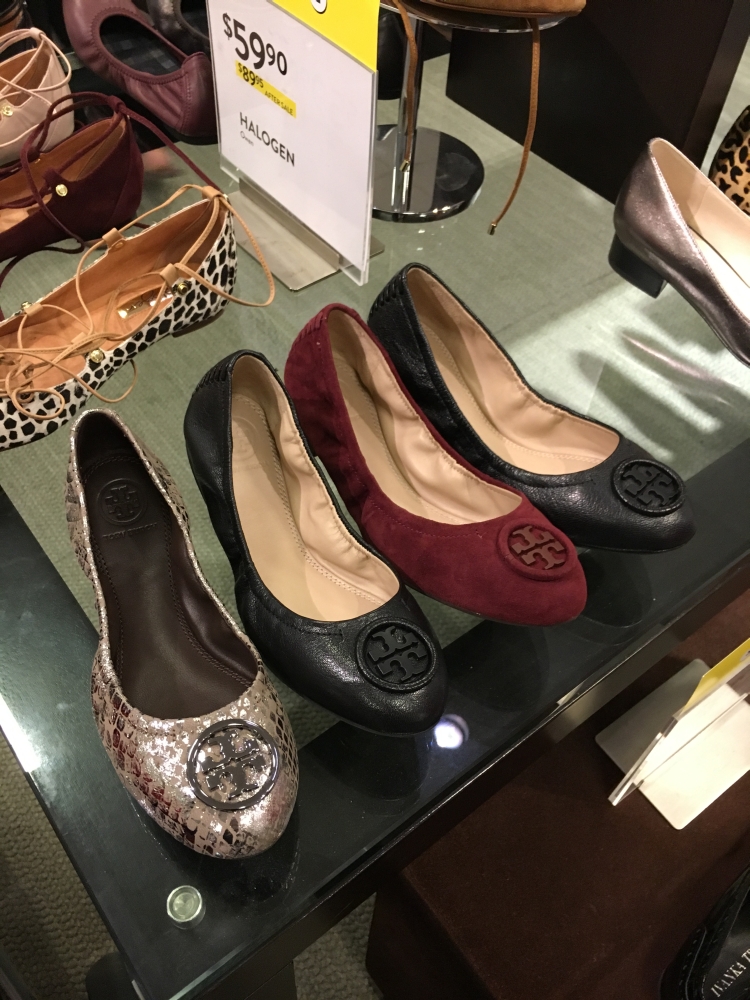 I only briefly looked in the Beauty tent. Lancome and Estee Lauder are both doing gift with purchases. 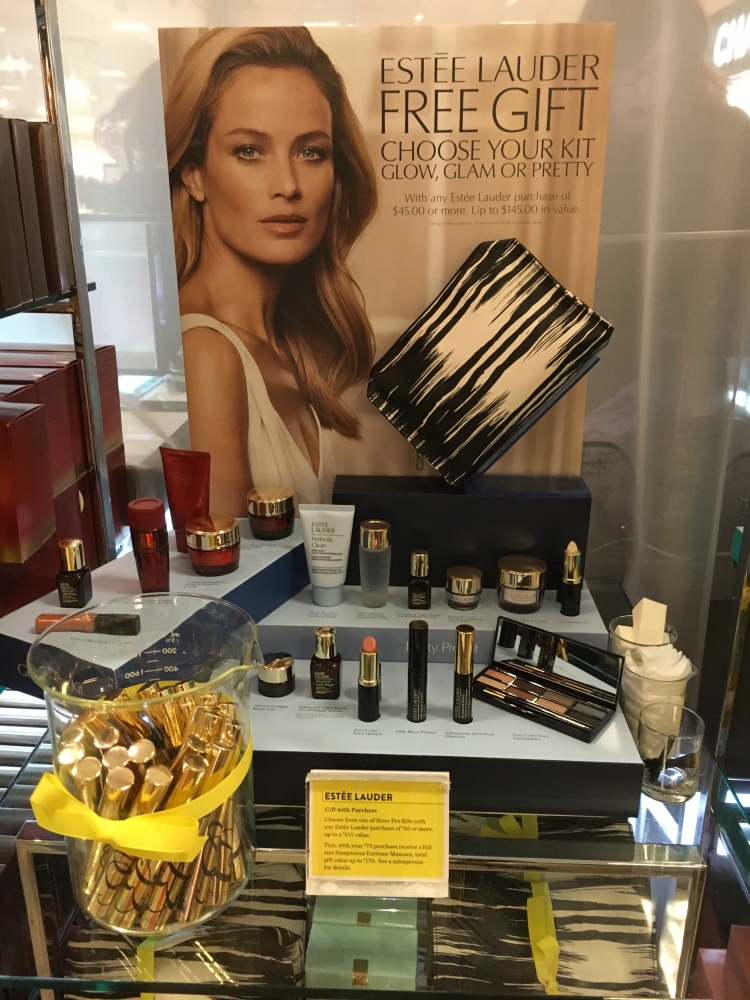 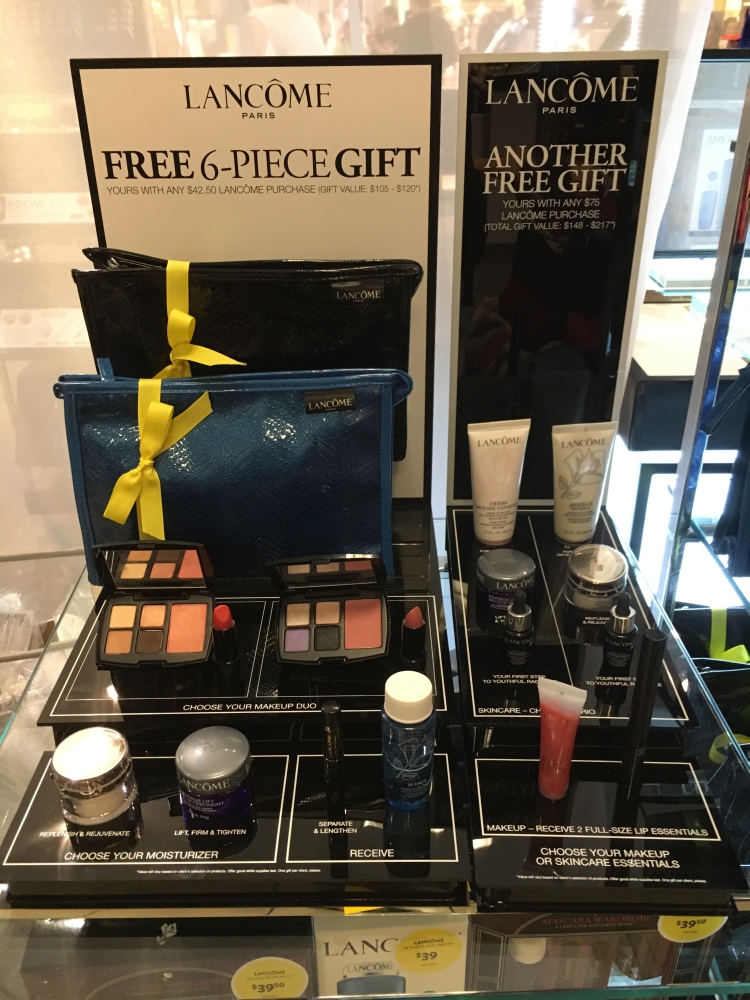 The Voluspa candles smell so good, I wish I could take them all home.  I liked the Saijo Persimmon one the best. 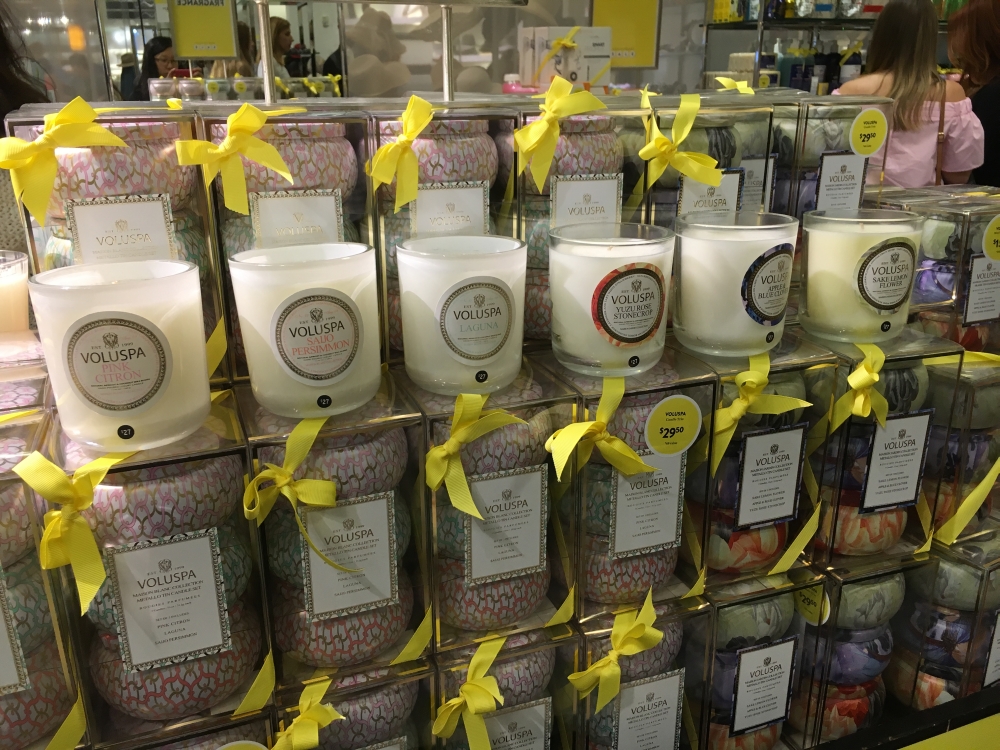 The MAC brushes look fairly well made. I have a set from years ago that I am still using. Is it time to replace them?  Hmm… 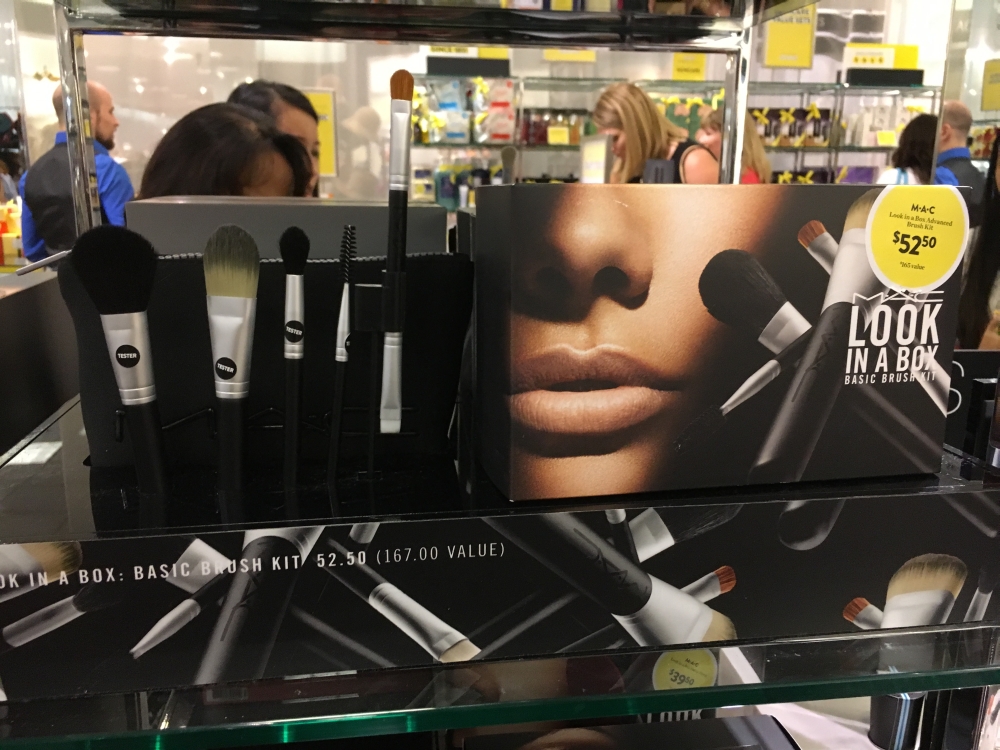 I tried on a whole bunch of stuff from POV, Individualist and BP.

I picked up the Pleione short sleeved top in a blue floral. The Pleione mixed media split neck tunic top that was popular last year was also back. I already have two from last year and don’t need another one, but was tempted by the pink. I am always tempted by pink. 🙂

There were a lot of plaid shirts! I tried the Treasure & Bond plaid. I thought it was true to size.

The Lush V-neck crepe blouse was really nice. I preferred this length over the one from last year. The blue colorway was gorgeous.

I tried on the Joie Suzetta top and fell in love. I actually walked out of the store without it and when I got home, I had decided I wanted it and ordered it.  What really got me was the delicate pintucking in the front and on the shoulders. So pretty. 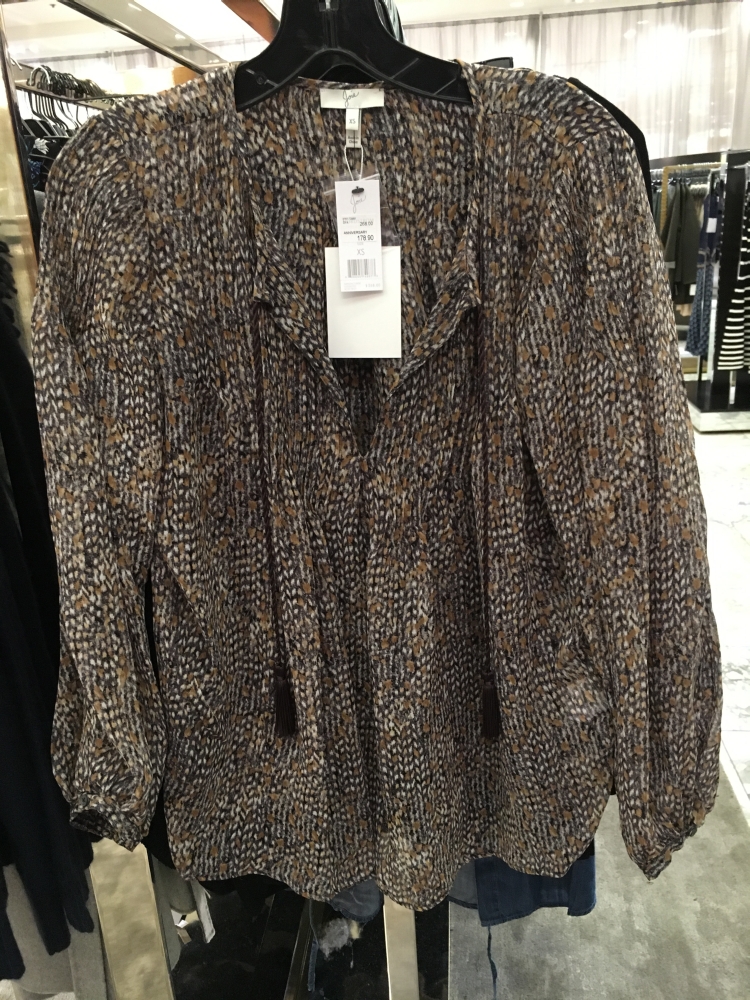 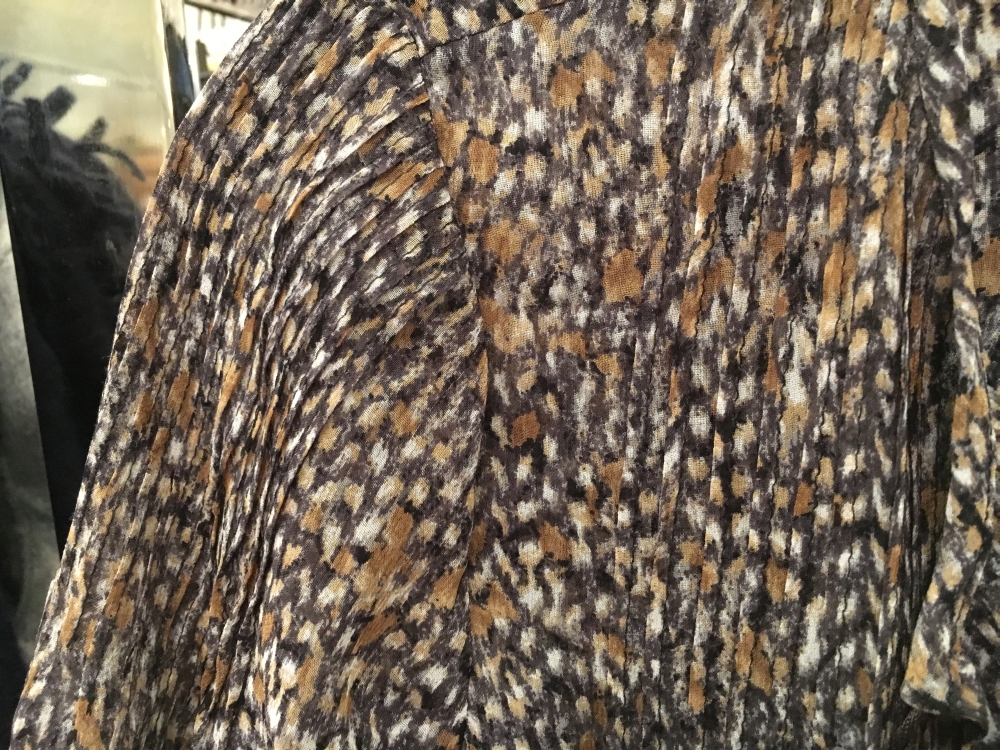 There was a MIlly tweed dress that was really pretty. I have very little occasion to wear dresses so I didn’t get this, but this would be great for someone who works in a more formal office. The metallic threads were really pretty. 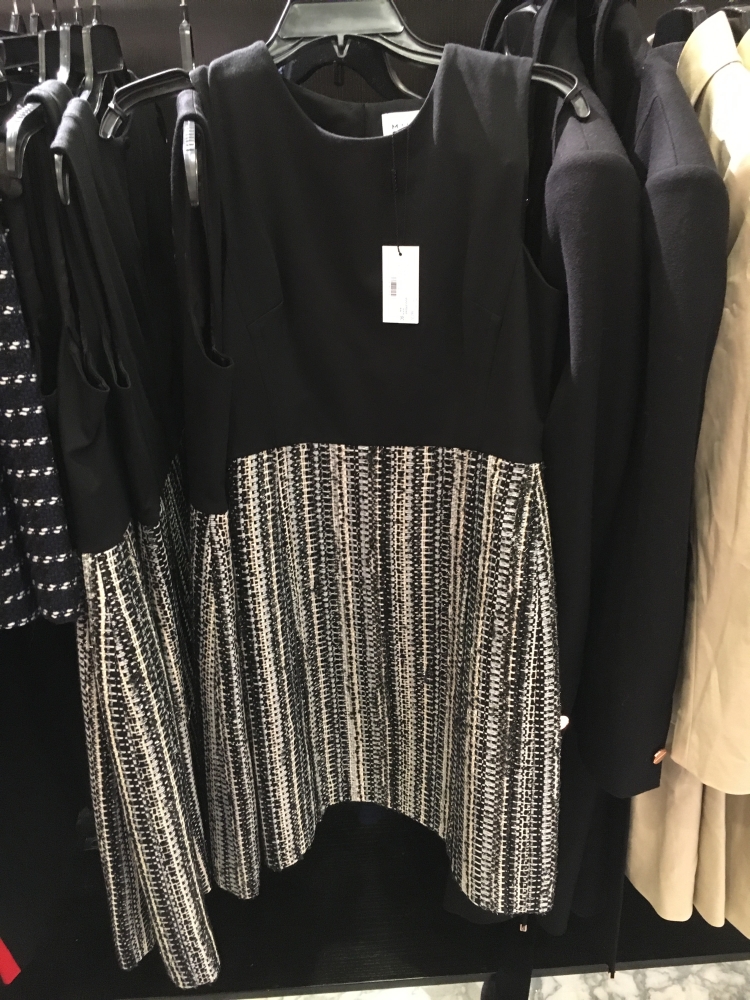 I tried the Ted Baker coat and Soia & Kyo coat and both were way too long for my petite frame.

The Kids section had tons of great stuff!  I was really tempted by the Ergobaby 360 carrier and if I didn’t have the older style already, I would probably get this.  There are also several different Aden & Anais swaddle cloth prints: Sail Away (blue), Hearts & Fireflies (pink), New Day (sun) and Sleepy Time (moon) themed.  I picked up a Little Giraffe luxe blanket in blue for my little guy.  I am tempted to exchange it for the charcoal color because I really liked that one in person! 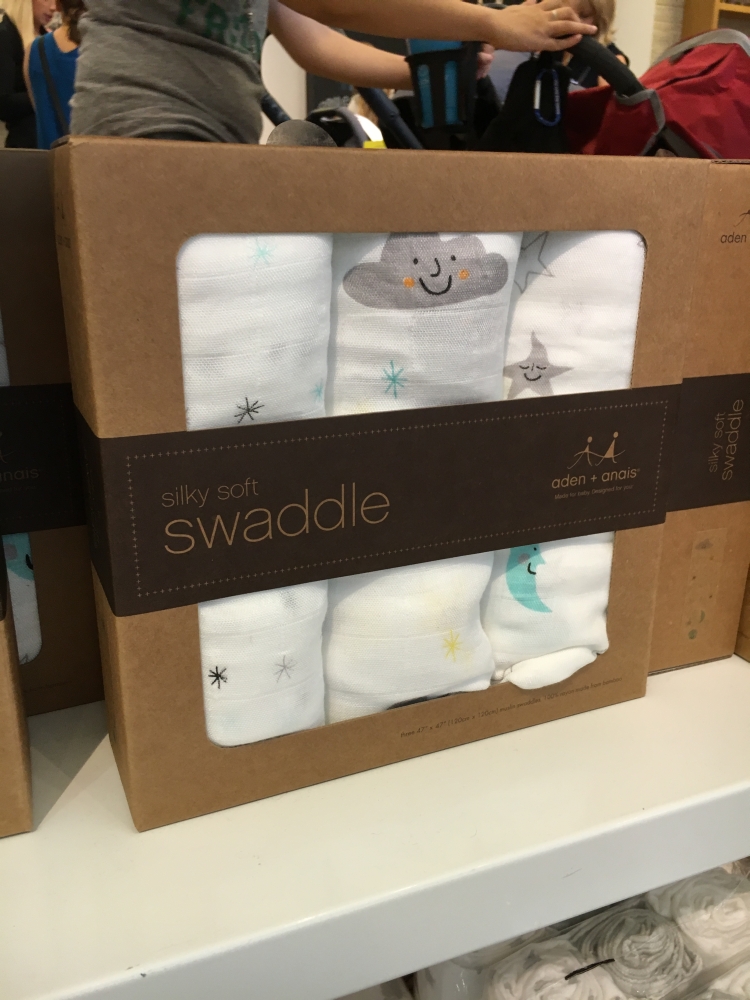 There were 3 pairs of Mini Melissa shoes included in the sale. These are so cute and my daughter has the Ultragirl II shoes (she calls them her cat shoes). The Freshly Picked moccs were also adorable.  I am trying to decide if my son needs a pair or not!  🙂 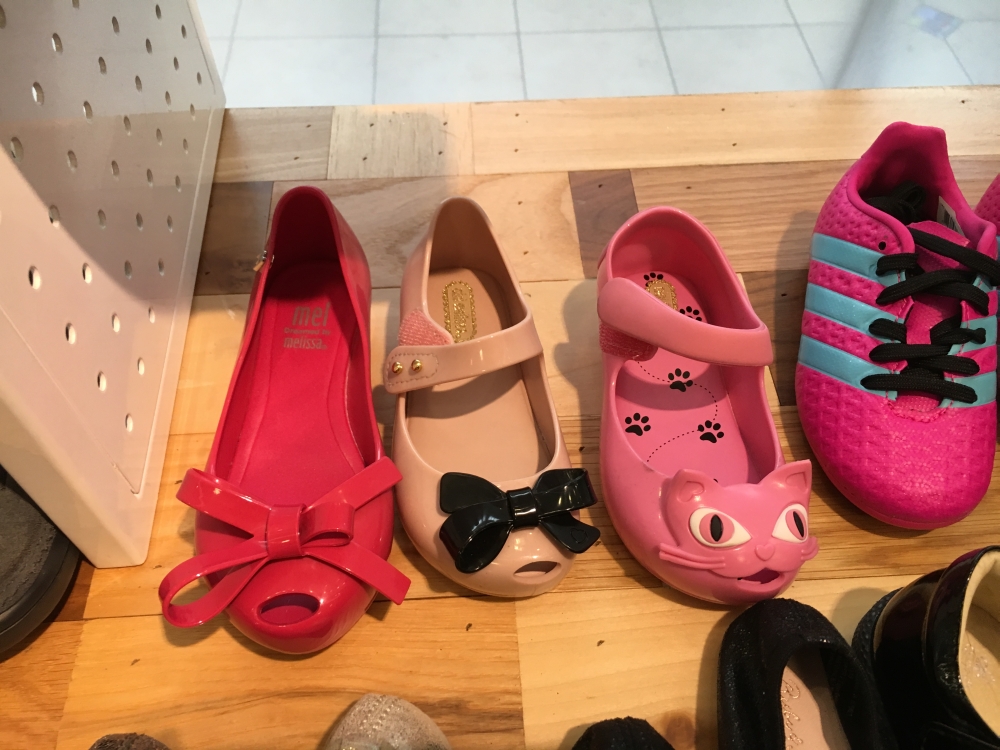 Nordstrom started carrying more and more baby gear in the past 3 years and they’ve put some great stuff out for anniversary.  The Maxi Cosi Pria 85 and Mico Max 30 are both part of the sale. There is also a Nuna travel crib that I want, but I already own a GoCrib otherwise I would totally get this. There were also Zoli cups and a Boon bundle that would be great as a gift. 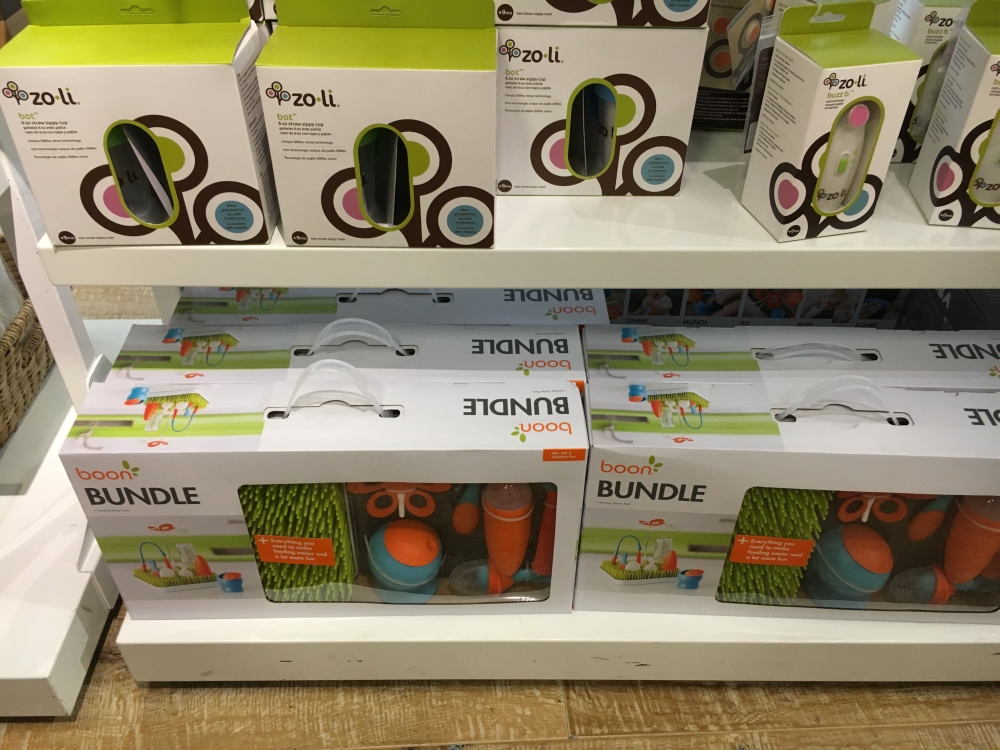 The Honest Company has put out a really nice gift crate the past few years. These are great shower gifts!  Pass on the diaper bag backpack.  I checked it out and it had a really foul smell when I opened it up.

Overall the sale was great! I bought a few new tops for work, but I mostly bought staple items like the Hue wide waistband leggings and some Zella leggings. How did you do? What was your most exciting purchase?